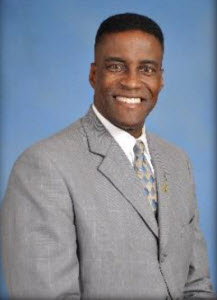 Kenneth W. Donaldson, President & CEO, Black United Fund of Michigan, Inc. is a lifelong Detroiter with childhood memories of a city with two parent families, safe neighborhoods and vibrant schools where the entire family was engaged in early childhood education. Ken graduated from Western High School and Western Michigan University with coursework at Wayne State University and Leadership Detroit XIV. Ken’s passion for family cohesion and stable communities led him to over 35 years of philanthropy, mentorship and community organizing. As the President & CEO of BUF of Michigan, a forty-five year old non-profit, Ken has helped to bring millions of dollars to Michigan’s non-profit, community-based organizations that work toward a better tomorrow for metro Detroiters and throughout the state of Michigan. His efforts have helped to support over 1,500 non-profit organizations impacting the lives of tens of thousands of men, women and children.

Under Ken’s leadership, BUF of Michigan, has become a fund of choice for donors and innovative, community based start-up organizations, as well as a go-to fiduciary for community events such as the MLK 50th Anniversary March and the $3.8 million City of Detroit Empowerment Zone Evaluation Project.

Ken is a devoted husband to his wife, Joyce, and dedicated father to their three children, Kayla, Kenneth, II and Kyana.