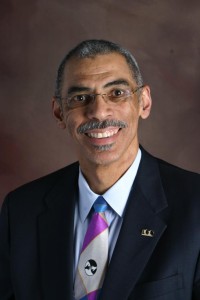 William F. Jones, Jr. became Chief Executive Officer of Focus: HOPE in January 2009. Jones is the fourth CEO in Focus: HOPE’s 40-year history. He recently retired from Chrysler Financial where he was Chief Operating Officer. Jones has been involved with Focus: HOPE since 1999 when he was elected to the Board of Directors. He has been chairman of the Board for one year and will continue to serve as a member of the Board. Jones brings to Focus: HOPE a range of experience from a 26-year career at Chrysler and Chrysler Financial. Starting as a corporate analyst, he progressed through a variety of finance and operations assignments of increasing responsibility. After a brief assignment with Nissan in 1991, Jones returned to Chrysler Corporation as the Director of Vehicle Pricing.

A native of Hampton, Virginia, Jones earned a B.A. in Psychology in 1973 and an MBA in 1981 from Columbia University. He was chairman of the Chrysler Financial Diversity Council. Currently, he is a member of the Walsh College Board of Trustees and the Charles H. Wright Museum Board of Trustees.